Arthur Lidov was the favorite artist of our stable of artist/friends - Arthur was my wife's mentor.

Arthur Lidov was a true Renaissance man. He holds the patent for the insertable spoke-less bicycle wheel which was impervious to flats! He developed a new technique for bas relief and developed and extended Namias methods of photo-sculpture. To say it mildly, Arthur was a genius.

His illustrations have great depth, bringing illustration Art to a higher level  yes, it was Commercial Art but some could hold their own on a museum wall.

He was going to teach Roberta (my wife) the lost art of egg tempera. When we heard the news of his sudden passing (heart), we were deeply saddened. I love his work and over the years have purchased quite a few from Arthur. He had a special glow regarding my affinity with certain pieces. I was a photographer whose business was not doing well, and was forced to sell some of my treasured works by my artist friends. One such work was the famed cover art by Arthur Lidov of the first edition of Ray Bradburys The Martian Chronicles.


Arthur Lidov had a large working studio in Manhattans East 60s. He had an interesting neighbor who also had his working studio right next door; Mark Rothko. A sad fact, was that Arthur Lidov, who had such a vast medical knowledge, examined Rothko after his tragic 1970 suicide and pronounced him dead. Though Rothko was completely Abstract and Arthur Lidov wholly figurative, both got along very well and discussed art for hours on end. At this time, Arthur was the foremost medical illustrator in the country. His portraits grace the covers of The American Mercury. He has additionally created covers for The Saturday Evening Post, Colliers and Fortune Magazine.

Visiting his home was always memorable, not unlike going to the home of a famous scientist. Alongside the artwork were scientific apparatus. I took my young son on one visit. He was enthralled with a large nude sculpture of a woman. He had a big smile and took a few pictures. He never saw the likes of this before! We miss you Arthur.

We fortunately have a study of one of Arthur's major works, The Net That Secretes Mathematics. It was an entry into the popular Museum of Modern Art exhibition, The Figure. Please see painting below. 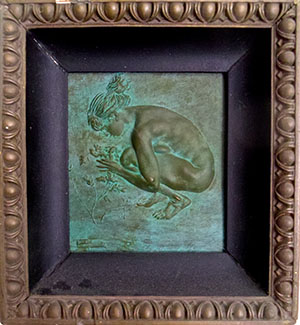 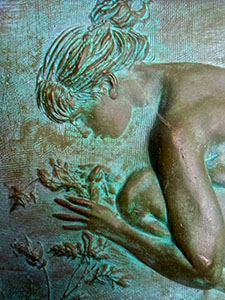 Please go to the contactlink below.

Powered by Bravenet.com. WRITING and PHOTOS COPYRIGHT 2012 THROUGH 2015, STUART FRIEDMAN.